The Science Behind Soap & Water

We all know that washing your hands is the best way to prevent germs from spreading, but how effective is this daily ritual really? Here’s a closer look at the science behind the basics.

Soap vs. just plain water
Turns out soap isn’t the only one doing all the heavy lifting in this cleansing duo. A 2011 study found that water has a marginally greater effect than soap on reducing bacteria.

Is soap clean?
Depending on how you store your soap, it might not be as clean as you think. Soap that’s left sitting in a puddle of water has a risk of multiplying in bacteria, which you then transfer to your hands when washing. Generally, it’s best to use bottled soap made for one time use. If using a refillable dispenser, be sure to thoroughly clean it between fills.

The antibacterial hype
According to the U.S. Food and Drug Administration (FDA), there isn’t enough science to show that over-the-counter (OTC) antibacterial soaps are better at preventing illness than washing with plain soap and water. In addition, it’s possible that antibacterial soaps might actually be contributing to bacteria becoming more resistant to antibiotics.

The right technique
In the end, it’s best to just stick to plain soap and water when washing your hands. It’s still one of the most important steps you can take to avoid getting sick and to prevent spreading germs. 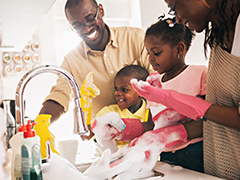